Street to the sky

They have four suspension points and a pin-jointed system for flexing the crane beam along with the movable roof. Street Crane's 'moonbeam' technology has been in development for the last 25 years, and it says it has installed similar designs for British Aerospace and Princess Yachts.

The Bombardier cranes span 20 and 25m respectively between the crane rails. The rails are integrated with the roof structure, and equipped with cantilevered extensions to give the system greater reach.

Street Crane supplied ZX64 hoists giving a 6m height of lift for all of the cranes.

It equipped the primary production area with a four-axis, 20t single girder crane, with a radically different design from what is typical in the market, Street Crane says.

"On the jiggle crane, the first hoist takes most of the weight of the wing and the second hoist ºprovides lateral adjustment allowing the wing to be rotated by 600mm and an additional plus or minus 300mm rotation around the beam axis," it said.

"This multi-span crane has four suspension points and an overall span of 64m with a cantilever at each end. The box beam design gives the strength and rigidity required, and is pin-jointed to give flexibility of movement to the crane beam so that it can flex with movements in the roof."

In the assembly area, an 8t underslung double girder crane can rotate wings just over half a revolution (200 degrees) on twin rotating hoists.

"Hoist and travel motion travel speeds are variable from 400mm per minute to 20m per minute with sensorless current vector control for accurate positioning with smooth movement," the company said. Radio remote control was included with the order to provide safety and ease of use, along with push button pendant as a back up control."

The Bombardier's system ensures wings can be moved along the 52m pin jointed crane bridge. "The turntable is equivalent to a small 5m crane running on a circular track between the main crane beams," Street Crane said.

Andrew Pimblett, Street Crane's managing director said, "This is a highly unusual crane design that is probably unique in the UK, if not the world.

"We have a similar set up at Heathrow Airport with an 80m span double girder underslung crane, but not of the same level of sophistication as the technology at Bombardier." 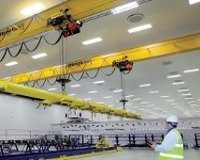 Hinged, multi-span cranes are unusual but essential in aircraft production where wide bays are common. 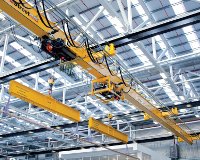 Crane rails are an integral part of the roof structure, rather than being attached to the building columns or supported on gantries.