Subsea lifting is used in a range of sectors, each with specific requirements. Julian Champkin investigates.

Lifting gear for marine and subsea applications is, naturally, specialised. Offshore windfarms are a new and developing technology and off-shore oil and gas needs ever more equipment to be placed on and lifted from the sea bed, and decommissioning old rigs is now an active speciality of its own. Ships need repairing, preferably without the expensive use of dry docks. Oceanographic research, driven by the imperative to understand climate change, is another area of demand for underwater lifting.

JD Neuhaus (JDN) has long been a leader in offshore hoists and lifting gear; pneumatically-driven hoists have been their speciality. The company has recently introduced a new, enhanced radio remote control capability for these. The transmitters and receivers can be directly fitted into new JDN hoists. They come with the standardised JDN interface which means that they can also be easily retrofitted into existing equipment.

Offshore conditions are arduous. The JDN receiver is of rigid and extremely compact design, so compact in fact that it is suitable for hoists with low carrying capacity as well as for larger models. Its shock-resistant glass-reinforced plastic casing gives protection to IP65 (dust and water protected) level. A breathable membrane guides any condensation away from the interior, allowing it to escape to the outside. It is useable onshore as well, but the design is sea-water resistant for offshore applications. Three remote control models are available, the RX-X. RC s and RC-SP. Up to 20 hours of use is possible before recharging of the portable transmitter; individual solutions according to customer needs are possible; and the RC-X is suitable for potentially explosive environments rated to ATEX zone 2/22. JDN has hitherto been a designer of exclusively pneumatic and hydraulic hoists and cranes. The company’s decision to develop their own electronics-based radio remote control may therefore seem surprising; JDN puts it down to their ethos of innovation. Certainly where there are long distances between the operator and the hoist, the remote control offers an alternative to long control hoses. Use in hard-to-reach places, and for simultaneous control of multiple hoists are other suggested applications.

Ingersoll Rand have a new range of subsea winches called the SLH, standing for Subsea Liftchain Hydraulic. A primary difference between this range and winches for land use, of course, is that this is designed for submerged operations—with not merely the lifting chain being submerged, but with the hoist itself underwater. It therefore has to be watertight— and it also has to be able to be operated by a diver.

“A typical application would be for ship repairs, or with a cofferdam,” says Arnaud Bruneel, their global product specialist. Ship repair yards use cofferdams to work on parts that would normally be underwater—the propeller shaft, for example. An enclosed steel box is fitted to the hull of the ship and the water is pumped out of it, leaving a dry working space. “We found that some of our customers were using normal hoists, not designed for this type of work, and were therefore experiencing problems. So we developed a dedicated product for such applications.”

Gus Caldera, global head of product management at Ingersoll Rand, says: “The range originated as a custom design for a very demanding application for a very demanding customer. Critical for this customer was that spotting must be very tight indeed: the hoist had to be able to move the load just a few millimetres at a time, to manoeuvre a shaft or the new propeller into position. So we did a lot of design development to achieve this; we made a few prototypes and we think we have got the design just right.”

The SLH series is designed for submersion to depths up to 30m and ranges in capacity from the 6t SLH-060 via 12t and 25t versions to the 50t SLH-500. “It has specific design features to protect the components from sea water,” says Caldera. “There have been instances where users of hoists that have not been used for a time have critically needed them, turned them on and found that the hoist has corroded. The potential costs of that can be very great: think perhaps of a cruise ship that might have to refund passenger fares. In the SLH a dedicated subsea oil stops water penetrating inside the hoist, so there is no issue with renewed operation after an idle period. Also the range is hydraulically powered, so it creates no bubbles when it is used underwater. That is important from a visibility point of view: it means that divers who may be working with it can see what they are doing.

“It has water-tight seals, marineresistant paint, and two sacrificial zinc anodes to protect against sea-water corrosion, so we are trying to help our customers keep their maintenance costs to a minimum. A built-in manifold gives overload protection and saves you from damaging the hoist if the cable reaches the top or bottom stops. And it also limits hydraulic pressures to avoid damage.”

The pendant control gives full progressive speed variations, from zero to maximum. “It has been designed so that it can be operated by a diver wearing diving gloves; and the pendant control can be fully disconnected for transporting the hoist to its lifting position,” says Bruneel. “That can be a complex operation, and you do not want dangling control cables to get in the way. Once the hoist is in position the pendant control is simply and quickly reconnected.

“There are other special design features around lifting the hoist into position. Normally, in shore-based industries, a sling might be put through the top hook of the hoist to lift it; but then that same top-hook is the support that secures the hoist in its place. The lifting sling through it can make it hard to mount the top-hook onto its final support. But the SLH can be lifted by slings from below, not through the hook. The top-hook is dedicated solely to the hoist’s use in lifting; it is not used for transporting the hoist.

“That is important because in most industrial applications hoists are permanently mounted on an I-beam or similar. But in marine or dockyard applications the hoist may be stored in a warehouse and brought out by truck or crane or forklift when it is wanted, so there is a lot more handling of the hoist itself. We have taken that into consideration in the design: you can handle and lift this series easily. It has a protective frame against shocks it might receive when being handled. And the top hook avoids the need to weld lug points to the ship’s supporting superstructure.”

In shipyards, such tasks as replacing propellers and main shafts are common. The alternative is for the ship-owner to wait for a dry dock to become available, and send his ship thousands of kilometres to reach it. The savings in time and money by repairing at the nearest yard using a cofferdam would be immense. So we see this as a tool for repair yards to have available on-site.” The SLH series is due to be launched in Q2 of 2019.

SMD, founded in 1971 in Newcastle upon Tyne, began as a small familyowned business and has grown to be one of the largest subsea manufacturers in the world. Production facilities are in in Wallsend and North Shields. Sales and support offices are in Singapore, Brazil and Houston, with a 7,200m² facility in Shanghai shortly to bring additional focus to that region. The company makes a variety of subsea vehicles and associated range of handling systems to launch and recover the packages in and out of the water.

“Typically SMD’s range of equipment is used for burial and protection of subsea cables or pipelines, subsea intervention tasks or inspection, maintenance and repair work on subsea infrastructure,” says their business development manager Matthew Woodward. “A recent project we delivered involved building a work class remotely operated vehicle (ROV) with the associated launch and recovery system. This type of vehicle is usually used for survey work, inspection, repair and maintenance, or subsea construction. However this system was unusual due to the extreme water depth and multi-mode operations that were requested.

“The first mode allowed the ROV to be launched with a tether management system (TMS) for extended excursion operation from the vessel in water depths of up to 3,000m. This is a standard configuration for oil and gas work: the steel-wire-armoured umbilical which sends power and control signals to the vehicle is strong enough to lift the ROV in air and so acts as the lift wire as well as the control cable. When the ROV is subsea it weighs almost nothing due to its buoyancy so the umbilical only needs to support the TMS weight and its own self weight in water, which is no issue at this depth.

“The second configuration allowed the free swimming ROV only (without the tether) to be operated at a depth of 6,000m, for salvage work and other deep water tasks. The use of the same steel-wire-armoured umbilical was not possible as the self weight of the umbilical at this depth means it would not be strong enough.

This was therefore made possible by an aramid synthetic fibre umbilical which is light enough in water to support its own self weight at this extreme depth. This umbilical however has a much lower safe working load in air; so a cursor launch system was necessary. It employs a lift winch and docking system to handle the vehicle through the splash zone and in air.” Wave motion moves the support vessel up and down. If this motion were transmitted to the ROV suspended beneath it, it would put strains on the umbilical and interfere with the equipment on board. The solution is an active heave compensation package. “It works via a motion reference unit on the vessel. This sends signals to the umbilical winch to pay cable in or out relative to the motion of the vessel. This system reduces the effect of the vessel moving up and down on the submerged ROV subsea, ensuring operational windows for the equipment are maximised. Without this functionality. operations such as docking in and out of the TMS can be difficult in high sea states.

“The umbilical winch has the facility to change the drum out at sea so the operating mode of the ROV can be altered as necessary between tethered management and free-swimming. It also uses the latest electric drive systems which provide greater response and control in various operating modes. The winch also has the capability to regenerate power into the vessel system for increased efficiency.” 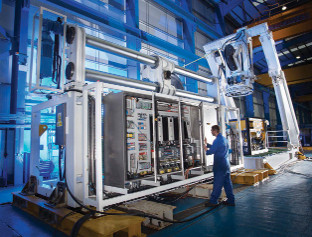 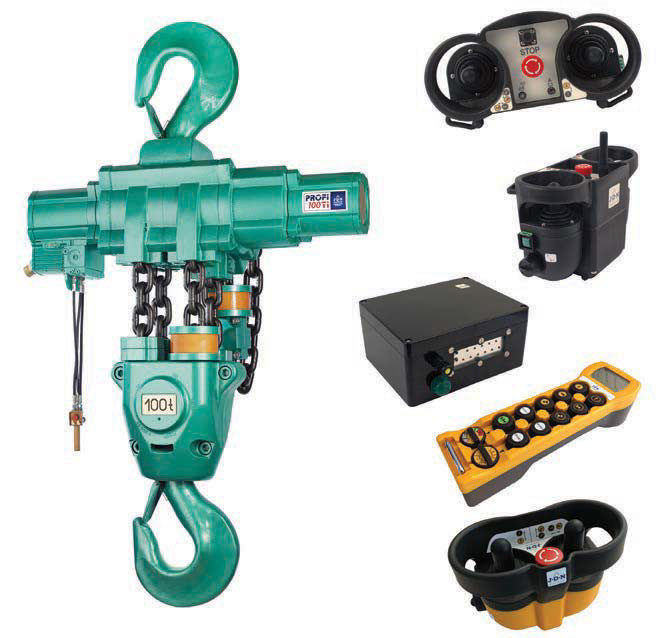