The Lifting Equipment Engineers Association (LEEA), based in the UK but with a global membership, started a new chapter at the start of 2018 with the appointment of Ross Moloney as CEO. Daniel Searle visited the organisation in Huntingdon, Cambridgeshire to find out LEEA’s goals for the future.

LEEA will be celebrating its 75th year in 2019, with a parliamentary reception due for July, but for CEO Moloney—who took on the role in January of last year— the focus is more on the future than the past.

“LEEA has a brilliant heritage,” says Moloney. “It was founded on really noble principles—members sharing their best practices, and discussing legislation and standards. As part of our anniversary celebrations we’ll be celebrating our past, but also looking at how to take LEEA into its next 75 years.”

The current stage is to look at where LEEA will be in 2030, says Moloney, and one of its targets is to improve the way it promotes its members.

“LEEA has always been good at providing services,” he says, “but it hasn’t always promoted itself and the work it does. And, it’s great that we support members—providing audit functions, training, putting on LiftEx, and so forth— but one of the key tenets of a trade organisation should be to champion its members. The way we advertise now is no longer to tell companies to join LEEA, but to tell end users that they should work with LEEA members.”

To this end, Moloney spends as much time with those end users and their stakeholders as with members, he says, to explain to them why they should use LEEA members.

“LEEA members have been audited, and they reach high standards above the bare minimum legal requirements,” he says, “which all saves end users from having to undertake their own due diligence and background checks on their suppliers.”

He also highlights to these users the big blue chip companies overseas who only use LEEA members, which helps to raise general industry standards.

It’s all part of LEEA’s list of strategic priorities, says Moloney, which include promoting its members, providing them with a competitive edge, and helping to identify and manage risks. To those ends, the organisation is looking into reinvesting back into the services it provides.

“This way we will be able to improve the services we offer, such as delivering more training at our members’ sites where possible, improving our auditing services, and enhancing our technical function,” says Moloney. “Our target is for our members to be able to ask questions and get a completed response within 48 hours, through the Technical Triage scheme we launched last year.”

This aligns with other feedback LEEA received from some of its members, says Moloney—that they would like the organisation to be more responsive and more nimble. Those requests have been backed up by an increase in the number of membership visits being carried out by LEEA—in 2018 the annual total more than doubled to 1,300, says Moloney. Visits can fulfil a range of purposes, from sorting technical problems to checking compliance, and beyond.

More information will be disseminated, too, through talks and a regular monthly webinar: “Our talks will be on a wide range of relevant topics, from the Australian mining industry through to accountancy,” says Moloney. “The webinars will be on topics such as guidance documents, advice from lawyers, and so forth.”

One of LEEA’s projects that gets Moloney particularly excited is apprenticeships. “It’s a key focus for 2019,” he says. “LEEA should address the things that keep our members awake at night, and finding skilled staff is a challenge at the moment. Working in the lifting industry is a real profession—you need skills and expertise. So we need to broaden the pathway into the industry, to get more people joining.

“We’re using our school engagement project, and work with local youth groups, to target the pre-option years [under 14s]. We need to convince students, but also pupils and teachers and parents, that lifting can offer a diverse range of careers—not just manual labour, but roles that use the sciences of physics and engineering. Our Apprenticeships Trailblazer programme works with young people in England with government input, and we’re also encouraging our members to work with local colleges.

“In 2019 we’ll also be looking at increasing military engagement; encouraging those who have worked in the military to ultimately work in civilian lifting. We will work with career transition schemes and the Ministry of Defence directly, to help military leavers come into the civilian sector.

“It’s partly about changing the perception of the lifting industry in terms of the careers it offers, but it’s more about creating pathways so people understand how they can move into our industry.”

Addressing the growing lack of skilled workers in the industry is one way LEEA helps its members. And Moloney would like to use industry research to determine what other issues can be addressed pro-actively.

“There’s a lot of data out there, such as census data, the National Employer Skills Survey, think tanks, and so on, but it’s hard to find research specific to the lifting industry, because lifting is a lateral sector that covers a broad range of industries. We want to compile industry research looking into areas such as the number of employees in our industry, their age distribution, and beyond— this could lead to predicting and solving problems before they happen.”

LEEA is also in the process of expanding the training it offers into non- English languages. “Around 40% of our members—450 out of 1,200—are based in the UK, and the UK office is the LEEA mothership, but we’re a global organisation,” says Moloney. “We have hotspots of members, such as the Middle East, the Far East, Australia and western Africa.

“The UK is our single largest region, but the LEEA model is now much more about being global. We’re currently recruiting staff in the Middle East and Far East, and the plan is to have a regional director and full-time employee by this summer in Australia, the Middle East and the Far East. The webinars will also help to reach international members.

“This won’t be to the detriment of our UK members, though—we’re cutting overheads so we can put more resources into membership overall.”

Moloney has also been speaking to national and regional trade associations around the world to see if there are possibilities for them to work together. Yet despite the global outlook, LEEA has not set any growth targets in terms of members: “The requirements for joining LEEA are actually going to become more stringent,” says Moloney. “Ultimately LEEA’s reputation is reliant on the quality of its members’ working practices.”

While training is mostly delivered to members at their own sites, using the equipment they have installed, LEEA maintains its centre of excellence in Huntingdon. Purchased in 2010 and featuring various modern amenities including LED lighting, plus an impressive array of lifting equipment, the centre has three major training rooms, two workshops, and two break-out rooms.

“We like to concentrate training on a mix of hands-on and theoretical training,” says Andrew Wright, head of L&D and deputy to the CEO at LEEA. “We also cover powered and non-powered equipment here.”

During my visit, a training group was being given a presentation on wire rope examination, one of the many classes offered by the organisation. LEEA can run three courses concurrently, notes Wright, thanks to the size of the centre. 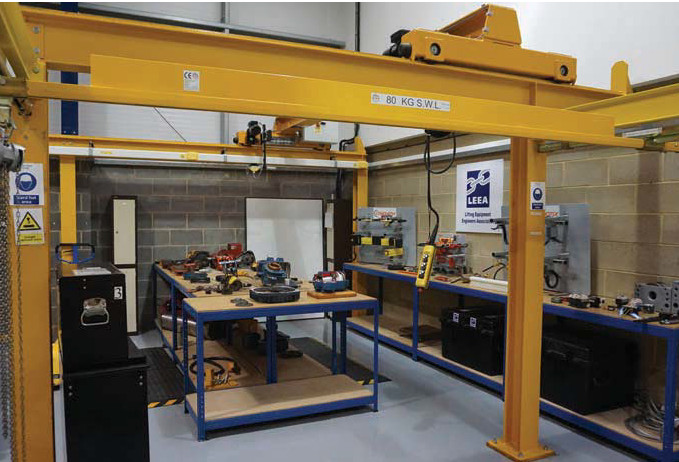 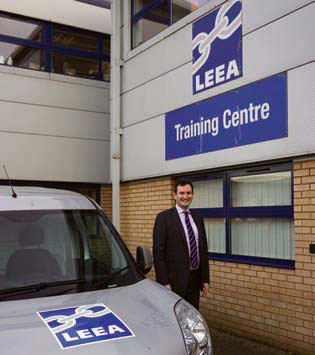 Ross Moloney at the Huntingdon facility, with one of LEEA’s vehicles for visiting its members. 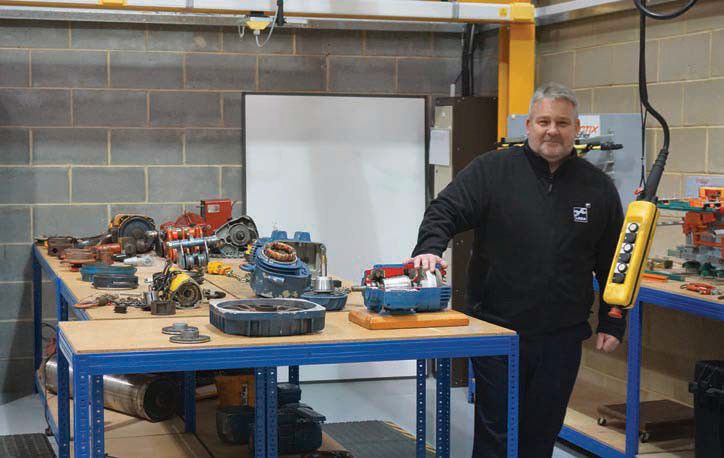 Andrew Wright, head of L&D and deputy to the CEO at LEEA, at the Huntingdon training centre.