Many of Europe’s major hoist manufacturers attended the CeMat and Messe Hannover show in Germany in late April. Daniel Searle attended the exhibition.

The story coming from the Western markets of Europe and North America during recent trade exhibitions was consistently one of steady, cautious positivity. At both Logimat in Stuttgart, Germany and at Modex in Atlanta, Georgia, USA, exhibitors discussed how recent growth has been steady and controlled. What’s more, with the memory of the 2008 economic crash all too fresh in certain industry sectors and geographical regions, many members of the industry are quite happy with this situation, rather than having to navigate the associated risk of a bust that always accompanies a boom.

The growth is being driven not just by the gradual recovery of markets following the recession, but also by a focus on continual improvements to the technology available. While the physics of lifting a load may remain the same as it ever was, the latest generation of lifting equipment further improves the efficiency and capability of end users’ operations.

At CeMat and Messe Hannover—the two shows were held together for the first time this year—the industry showcased not just the digital technology that has defined recent years through the trend dubbed ‘Industry 4.0’ but also innovations in traditional mechanical engineering. Many of the stands at the show were open-sided to allow full-scale cranes and hoists to be displayed.

Kuli’s stand was dominated by a 20t hoist with two falls, which after the show was due to be delivered to a manufacturer of forgings, for installation at its outdoor storage facility.

Also on show was a compact hoist on a double-girder crane, which demonstrated one of the company’s approaches to its fully in-house production. The design of the hoist frame with modular mounting plates and wheel blocks accommodate different configurations, explained managing director Oliver Kempkes, such as single-girder and double-girder cranes, as well as low headroom and twin hoist set-ups. This ability to use the same design of component for different standard configurations, as well as customised solutions, is one of the ways the company keeps prices down, he added.

“The market and economy are good at the moment,” said Kempkes, before adding a caveat: “However, the increased number of orders does mean that delivery times have to be slightly longer.”

LiftKet, a manufacturer of electric chain hoists, also offers a twin hoist system. Although the technology isn’t required by the company’s customers regularly, said deputy head of sales Tom Schumann, it shows the capability the company has.

“The Twin Hoist is used for lifting long loads, for example drums or rolls of paper or steel,” explained Schumann. “It features a synchronised hoist, which is mechanical rather than electronic and uses a mechanical interlock.”

The company, which is based near Leipzig and has around 250 staff, supplies hoists for industrial applications, the entertainment sector, and customised projects such as wind turbines.

Its latest technology is the Star VFD hoist with frequency inverter; a prototype was on display at the exhibition with the system, which is currently in testing, due to be launched in the fourth quarter of 2018. The Star VFD offers a range of features including the ability to lift at double speed when not under load; a display on the unit showing real-time load measurement; and the ability to constantly monitor the usage of the hoist, in terms of both time and the weight of the load, and calculate the number of full-load hours completed by the hoist. The unit will initially be able to lift loads of up to 2t, added Schumann.

Spain’s GH introduced its Twin Hoist system, which is based on the standard hoists manufactured by the company, and is designed to provide vertical lifting without lateral displacement; a reduction in the stress on structures caused by starting and braking during lifting; and increased safety, as in the incident of one rope breaking, the load is still suspended by the remaining three ropes.

It also offers the benefits of low speed regulation through the variable frequency inverter; a speed increase of up to 50% when carrying a load up to one-quarter of the rated load; an anti-sway system; a rope safety factor of 5, in accordance with the guidelines of the European Machinery Directive and CMAA standards; and the options of a drum brake for emergencies, and safety cable for special applications.

The company also now offers its regenerative inverter as an option on all its standard hoists, enabling the hoists to recover and store the energy generated when braking is applied to the load, allowing the power to then be used elsewhere. Jaso, also based in northern Spain, introduced visitors to its SmartLink system, for measuring the operations of a crane, as well as storing data such as the location, age, safe working loads, and more.

Indicators alert the operator if limits such as the maximum load are exceeded, while the system also monitors the load spectrum— how often each quartile of the load limit is used—to calculate the overall total daily load in hours. This enables operators to check cranes are working correctly and are being used correctly, as well as helping to plan maintenance stops for replacement cables, brakes and so forth. The software can also be customised, so operators can choose which variables and metrics are displayed.

At CeMat, the system was very nearly ready for end users—the software was ready, explained export area manager Danel Leunda, with the hardware set for launch by July. The SmartLink may become a standard feature or may be optional, added Leunda.

The latest hoist from JD Neuhaus, the new JD Neuhaus Mini, also offers easy-toaccess data, with a service app available for smart devices that scans the NFC tag or QR code on the hoist. This provides the operating manual, technical data, work certificates and so forth.

It’s one of the features of the new hoist that was developed with the company’s customers, and for their customers, said Andre Rohde, head of sales. The company set up a project team to develop the hoist, and the result was a product that provides greater safety, a longer service life, and easier maintenance.

The maintenance is made more simple thanks to a service flap—a cover that opens to allow access to the motor for lubrications, and through which the entire motor can be removed for maintenance without the hoist being taking from the factory set-up. The chain guide is also easily replaced.

Erikkila is now fully-owned by Kito Europe, which also acquired 37.5% of Van Leusden in April. Between the companies, they can supply a full system including hoists, rails or tracks, and hooks.

Erikkila demonstrated its Prosystem light crane system with internal conductor rail as standard, in both aluminium and steel models. Also available on jib cranes, the technology means that there are no external cables, making it easier and safer to move.

The ProSystem enables hoist operation both through a remote control and manually, as well as automatically slowing as it reaches the end of a beam. Also being promoted were the company’s hoist tracks, available as both straight or curved systems.

Maarten van Egmond, sales manager at Van Leusden, discussed some his company’s innovations on show at the group’s stand. Focusing on the offshore sector, the company produces jib cranes with a fixed position, moved using a chain, to prevent the crane from being moved by the motion of the sea—its rack and pinion system provides similar benefits.

Van Leusden also manufactures explosion-proof components such as hooks, which are sprayed with a 300-micron-thick coating of bronze, which produces a more durable result than alternative methods, said van Egmond. Oscar Fillol at Elebia explained how the company’s lifting attachments improve safety, with the recently-launched C5, designed for work with metal plates, pipes and beams, on display. The C5, as with Elebia’s electronic hooks, has a failsafe mechanism that prevents the attachment from unlocking when under load, thereby stopping the load from being dropped accidentally—unlike with electromechanical systems, said Fillol which will drop a load if the power fails. The 5t-capacity system also offers a light display to indicate if the device is locked or unlocked, as well as a battery that gives a week’s operation from two hours of charging. The company recently received an order from a port in Singapore for the C5 system, added Fillol.

Elebia also showcased its system for lifting bell furnaces, a task that poses a number of challenges, including high temperatures, high lifting points, and often limited access. The Elebia system provides a fully closed loop, rather than a standard hook, and so again prevents any chance of the load being dropped. A 20t-capacity system was sold to a steelmaker in Germany, said Fillol and the company has now asked Elebia for a 50t-capacity model. Gebuwin promoted its LS5000 low-speed 400V electrical winch, which offers two notable advantages, said account manager Alan Siertsema: because it has a relatively very low torque to lift loads of up to 5t, it is also available in a 230V model, which can normally only lift up to 3t; and because it’s a low speed model, the price is very low. Also on display was the WD1000 drill winch, which can be operated both by hand with a detachable crank, or with a drill. Also using low torque, the winch can therefore be operated with a battery-powered drill. The unit is available in capacities up to 1t and is four times faster than a normal winch, said Siertsema.

Reid Lifting drew a crowd, including a local television crew, when they lifted one of their team above the stand partitions. Back at ground level, the Wales-based gantry crane and davit manufacturer discussed the customised gantry it produced for UK telecomms firm BT. Also promoted was the gated trolley for Reid’s main family of gantries, which can be added onto the beam after set-up, rather than having to be threaded onto the beam during set-up. The innovation was already available for Reid’s Rapide range, and is now being manufactured for the company’s flagship range of gantries 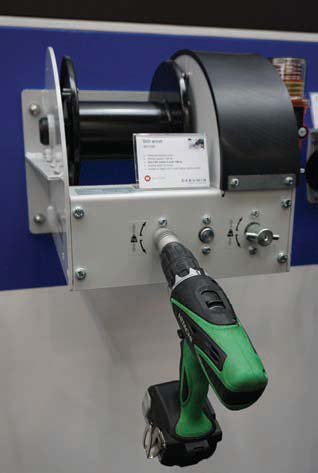 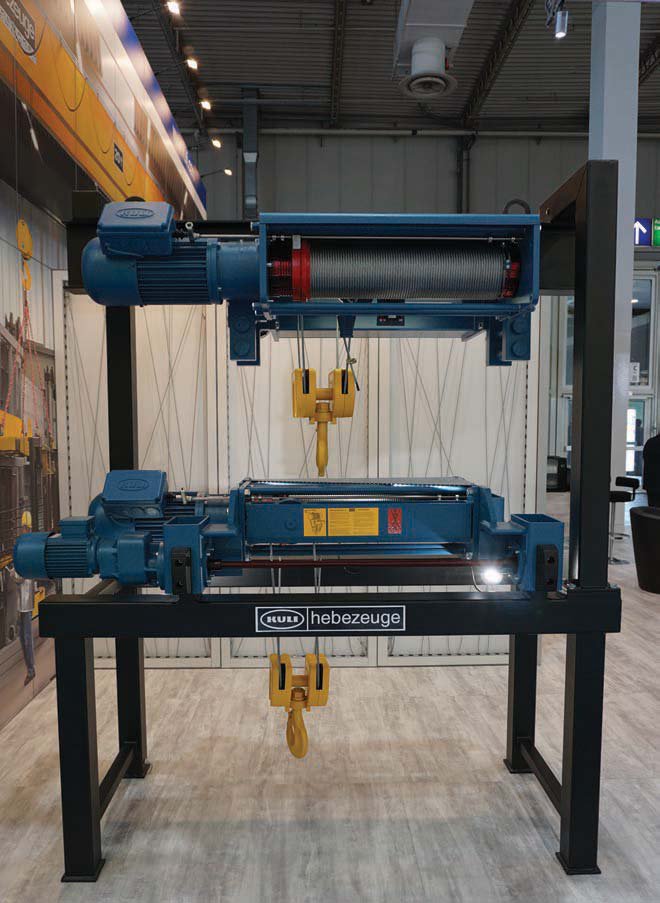 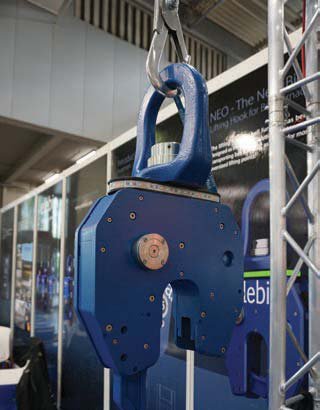 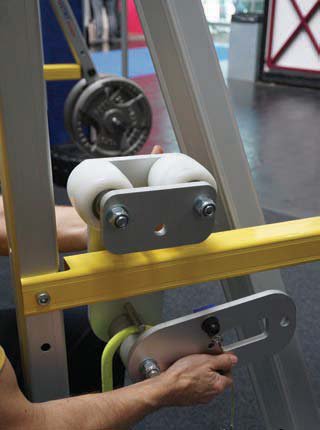 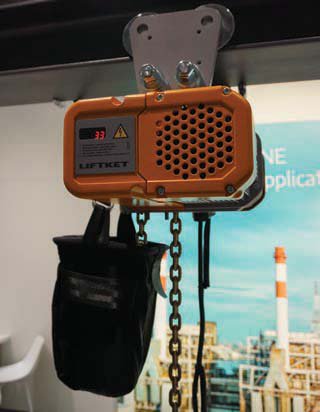 One of the team at Reid Lifting had an aerial view of CeMat, using the company’s kit. 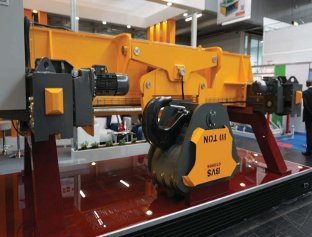 Kuli’s stand included a 20t hoist with two falls and this compact hoist on a double-girder crane.