With the 2020 Hannover Messe exhibition postponed until next April, Daniel Searle rounds up some of the latest innovations from Europe.

Schmalz, based in Glatten in the Black Forest region of Germany, has expanded its JumboFlex modular vacuum tube lifter system with three new operator handles: The JumboFlex Safety+, the JumboFlex Easy-Release, and the JumboFlex Quick- Release.

The JumboFlex Safety+ handle focuses on optimum safety, with the operator required to use both hands to operate an additional release lever and the control button simultaneously to release the load, thereby reducing the risk of an accidental release. This also protects especially delicate components, adds Schmalz. Further safety measures include the option to adjust the lowering speed directly on the handle using a screw. The handle is compatible with all the lift capacity ranges of the JumboFlex system: 20kg, 35kg and 50kg.

The Easy-Release control system also features an additional release lever, but with a different function and operation: when the operator presses the control button and auxiliary lever, the residual vacuum is reduced, making it easier to set the load down, particularly when handling airtight objects or when using suction cups, says the manufacturer. To prevent the release lever from being actuated unintentionally and the residual vacuum being reduced prematurely, the lever remains locked until the control button is fully depressed.

In contrast to the Safety+ handle, adds Schmalz, the operator can perform the handling process with one hand, leaving the other hand free to align the load. The Quick-Release handle, meanwhile, allows the load to be released from any height, with the aim of shortening cycle time when robust loads and components need to be handled quickly, for example in the baggage handling department at the airport, says Schmalz.

Both the Easy-Release and Quick-Release handles are compatible with the largest JumboFlex model, with 50kg capacity.

Schmalz has also introduced its V-Chain cable carrier system, to be used with its flat jib. The system fits the hose assembly for the vacuum supply into a cable track, eliminating loose-hanging loops and creating space underneath the jibs. This allows forklift trucks to pass safely underneath, as well as helping in applications with restricted headroom or low ceilings, says Schmalz, with the innovation adding around 750mm of extra usable space underneath the jib compared to a trailing cable.

Part of the renewed appeal of what was CeMat is its combination with the Messe Hannover show, which has rejuvenated the event.

“The CeMat show as it was had lost a bit of its attraction over the past couple of years, and more and more big players in our industry have decided not to participate any more,” says Oliver Riese, export manager at Kuli. “Therefore the exhibition management—where Heinz Helmut Kempkes, our senior director, is a member of the advisory board—decided to eliminate the name ‘CeMat’ and integrate the show back again into the big Hannover industry exhibition, which shall increase the number of visitors and give our industry a bigger attraction again.

“Moreover the show has got the tagline ‘Logistics 4.0’ and should concentrate on the latest developments in the field. Innovation should be the key point, instead of being a pure sales exhibition, developing the state-of-the-art trend further.

“Our main focus would therefore have been not that much on our wide product range, but on the innovations we created in the past months. With the invention of Kuli’s SmartER cranes, we would definitely have met the exhibitions’ request for new technologies and we felt really sorry for not having got the chance to exhibit. “Our plan for the booth focused on the idea of reducing the number of exhibits and mainly concentrating on the Kuli SmartER systems.”

The aim of the SmartER cranes is to reduce energy consumption, says Riese; Kuli also applies the Ökoprofit certification to its own production, relating to the reduction of carbon dioxide emissions.

The system works by recovering energy from the braking system, explains Riese: “We are using the nascent energy during the brake application of hoist, crab and crane movement and lead it back to the grid instead of wasting it as heat.

“The initial costs are low in comparison to a system that would need brake resistors instead, which have to be paid for as well, and would need space and add weight to the crane.

“The energy savings are remarkable. With a 12.5t crane for example you would save approximately 3,150 kW/a, which corresponds to approximately 1,692kg CO2/a only for the hoisting motion. You can imagine what this would mean to a typical lifetime of a crane.

“More and more companies promoting their environmental engagement and our system fits perfectly to that strategy. There is no additional work for the customer; the whole system is built in the control panel. Motors are FI driven and together with the additional Energy Recuperation units you simply connect the control cabinet with the grid. The rest happens automatically.”

Vetter Krantechnik, based in the Siegerland region of Germany, has modified its mobile slewing jib crane to create the Mobilus model, designed to offer a range of benefits. The crane base can be lifted and transported using the forklift pockets, or can be pulled using a drawbar and coupling system. Using its lifting lugs, the crane can also be transported using a hall crane, says Vetter, as well as being moved manually using its integrated trolley.

The newly-developed crane base incorporates a modular design, with the base comprising concrete rings that can be combined with different crane models. Depending on requirements, each end user can select a standard crane with a slewing range of either 360° or 270°, with an underbraced jib arm or a lightweight aluminium jib arm. The Mobilus is also available as a versatile handling crane with articulated jib arm, adds Vetter. Each crane can be modified throughout its life to suit different applications; the crane base can be extended with further concrete rings, and another crane type can be installed.

Luxembourg-based Codipro, a specialist in swivel lifting rings, had planned to present its Coditracer system at Messe Hannover this year.

The traceability management tool was developed on the bases of Blockchain technology, says the company, and enables traceability of each ring through every step of the production and usage process, including: the production of the raw material, the assembly of the ring, and its distribution and use.

Each ring has an individual traceability number, which the operator enters into the accompanying application via a tablet or smartphone to provide instant access to all the information on each ring, including the technical data sheet, certificate of conformity, and the instruction manual. Codipro also offers a seven-year warranty on all its rings, on condition that they are requested via the app. Coditracer is also accessible as a web version via Codipro’s website, offering even more information.

The most recent range of hoists from Turkey-based CMAK is the company’s CMX series of electric wire rope hoists.

The hoists are suitable for medium to heavy conditions, says CMAK, with lifting capacities up to 37.5t. The range is designed to provide easy installation, stable welding structure, and reliability, with the trolley traversing controlled with a frequency inverter.

The hoists are equipped with top and bottom limiters and overload limiters, and are compatible with FEM and CE standards, says CMAK, making them very reliable and safe. A manual brake release function allows loads to be lowered to the ground manually in the event of an unexpected power failure. 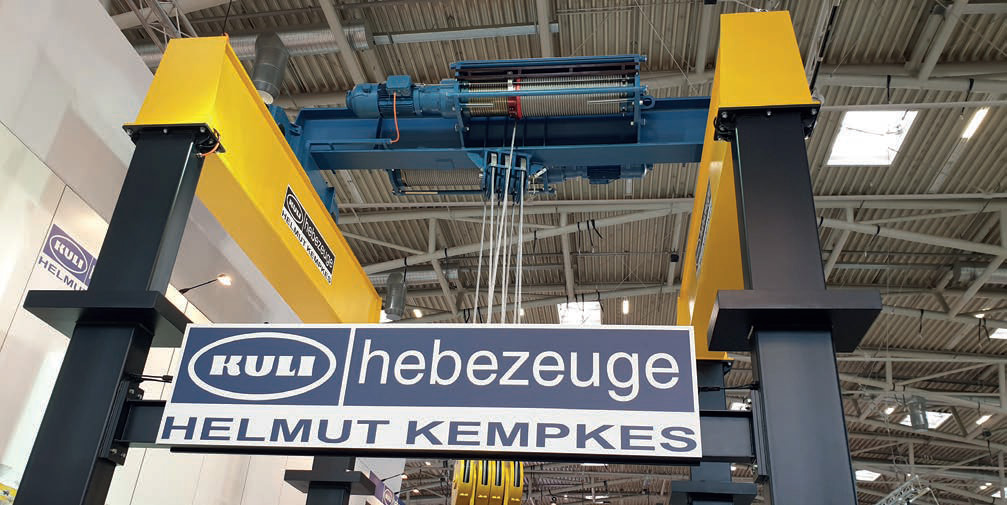 Kuli’s stand from Bauma in Munich, Germany, last year. On show was a 45t-capacity hoist fitted with six energy recuperation units, on the hoisting systems and travel drives. 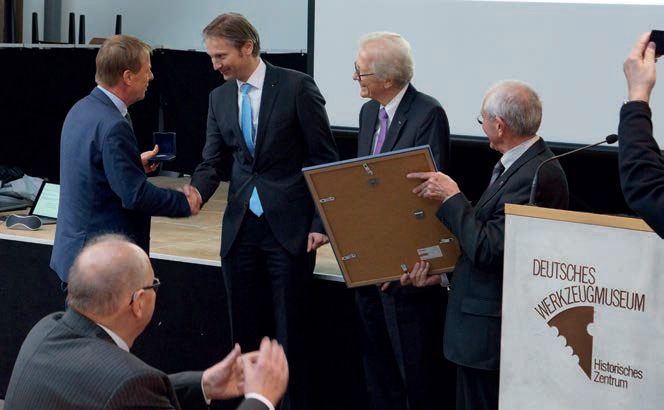 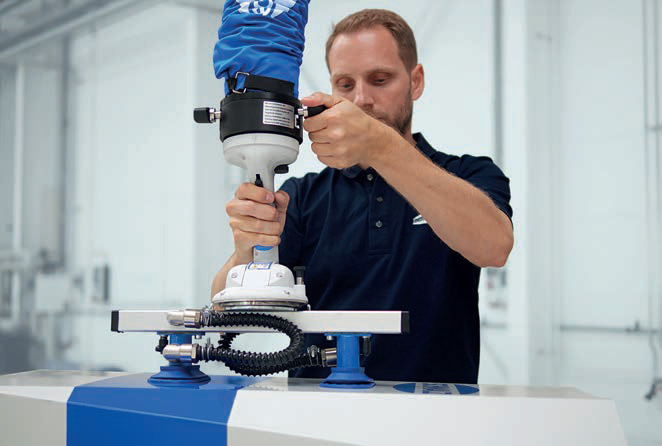 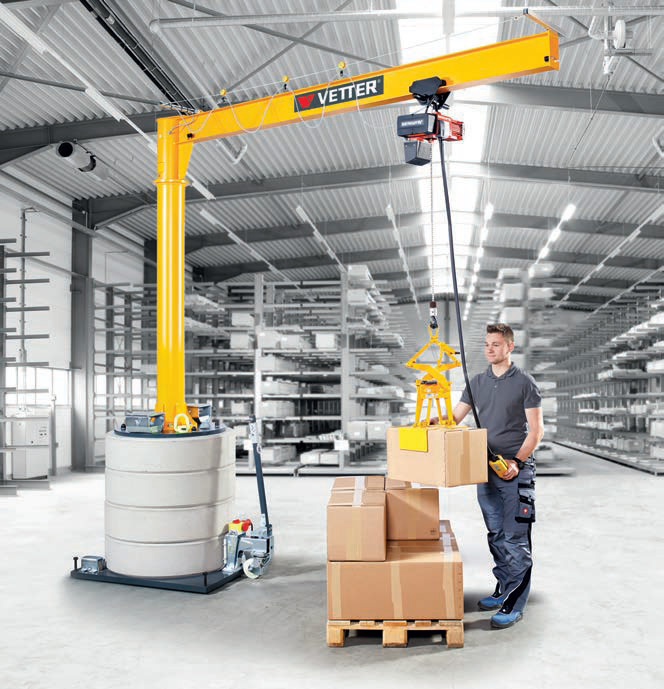 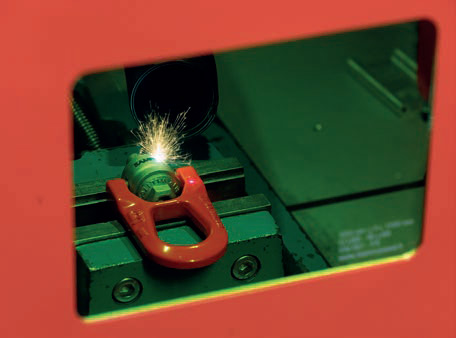 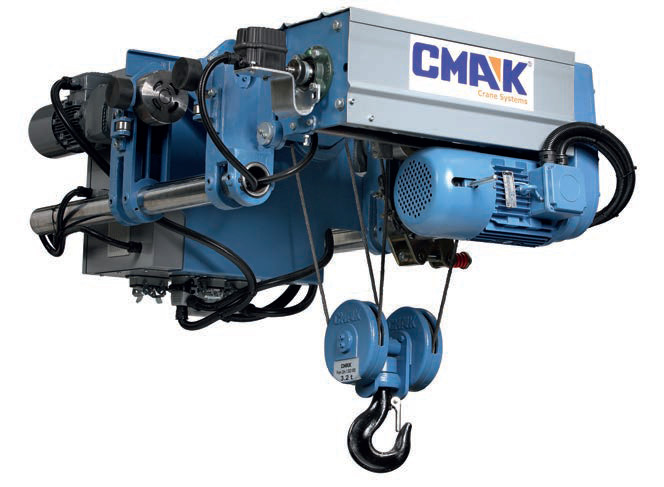 CMAK’s latest range of hoists is the CMX series.