Crane performance has been improved in recent years by variable frequency drive (VFD) technology, offering benefits such as smoother acceleration and deceleration, which in turn lead to faster and more accurate positioning.

Using VFD to control deceleration has also enhanced braking, with the system taking charge of the majority of the slowingdown process, leaving the conventional brakes to be used primarily only for bringing the hoist to a complete stop.

David Comiono, vice president at Engineered Material Handling (EMH) in Ohio, says: “VFD is the current state-ofthe- art, and is much more sophisticated in terms of more accurately controlling speeds. It offers so many advantages; for example, it enables the hoist brake to be held in the open position as the VFD system is electronically controlling the load, so the brake isn’t used much, which reduces wear. The brake is only required when coming to a complete stop.

“Additionally, when you rely on the hoist motor for electrical braking, it creates heat in the motor, but with a VFD system, the heat goes into an external braking resistor.”

And, he adds, VFD systems are becoming smaller and less costly, as with all electronics. However, the history of using VFD in the crane industry had a slow start: “Industries stayed away from VFD control to begin with as the very first systems weren’t always reliable,” says Comiono. “15–20 years ago the discussion around using VFD control and braking began in earnest, ten years ago they become more common, and over the last five years they’ve almost become considered a given.”

Most standard or packaged hoists use a DC-rectified disc brake for the hoist, bridge, and trolley: “The safety code stipulates that cranes require both an electrical and a mechanical means of braking; the mechanical side is covered by the disc brake, and the regeneration capabilities of the motor ensures that it won’t exceed the maximum speed limit by more than 10% in the lowering direction, covering the electrical side,” says Comiono.

“I suspect that ten years from now, we’ll still be using AC or DC disc braking, just to meet the requirements for mechanical braking.”

Most manufacturers buy their own motor disc brakes, notes Comiono, although a couple still make their own. “Similarly, everyone used to build their own gearboxes, and there are a few traditional guys out there who still do. But now there are specialised manufacturers [of motor disc brakes] such as SEW, Nord, and Bonfiglioli, to name a few, providing more cost-effective solutions.”

For lifts where additional security is required, such as lifting molten metal in foundries or projects in the nuclear sector, a secondary brake can be added. “The old-style system is a ratchet and pawl, but the industry is moving away from that; there are numerous types of brakes that can be added on the drum,” says Comiono. “On engineered or built-up hoists for specialised applications, customers may prefer shoe brakes or band brakes for ease of maintenance. Some sectors such as mills want an open design, again making it easier to service.

“And for handling really fragile, expensive or dangerous loads, an emergency lowering brake might be added, usually on the drum or gearbox shaft. Using this, the operator can get on the crane and lower the load in a controlled manner.”

“For example, we are about to complete a project which includes one 100t + 25t and one 80t + 15t capacity custom-made open winches for one of our clients in Mexico, and these cranes will operate in a crushing mill plant. Therefore, we used a pair of electrohydraulic brakes to ensure the safety. In addition to this, we used emergency drum brakes to take a step further for safety and to create redundancy.”

Both electromagnetic and electrohydraulic brake systems have different advantages depending on their design and the intended purposes of them, adds Gülerci. “Briefly stated, the main advantages of electromagnetic brake systems are durability, compact design, easy assembly and maintenance, silent operation, and asbestos-free brake pads. Regarding electrohydraulic brake systems, of course these brakes are more powerful and suitable for high capacites and lifting speeds, and they are also long-lived, and durable against high environmental temperature and dusty conditions.”

“For our failsafe hoisting solutions, we had to explore beyond traditional calliper emergency brakes as their performance can often fall short,” says Dave Little, SCX Special Projects’s Nuclear sales manager. “That led to a partnership with Siguren and its innovative MotoSuiveur system.

“The MotoSuiveur’s design will never allow a free-fall condition to develop in the event of a mechanical or electrical failure of the hoist drive or gearbox. It doesn’t depend on the friction of brake pads to arrest the load: instead, it brings it to a rapid and safe stop through an ingenious damped, interlocking worm and wheel mechanism.

“In practice, this means that the load is arrested in less than 50mm of vertical hook drop, a level of performance that is simply unachievable with traditional calliper hoist brakes.”

The system’s worm and wheel drive is mounted directly to the hoist drum, explains SCX. In normal operation, the unit simply ‘follows’ the rotation of the hoist drum—hence the name MotoSuiveur or ‘motor follower’. The hoist arrest action is purely mechanical and based on the principle of non-reversibility of worm and wheel drives. Should any unexpected movement outside normal parameters take place, for any reason, the worm makes mechanical contact with the drum, and locks the system. Using a patented design, the worm then slides and is damped by an oil-filled chamber, preventing any shock loading of the hoist, the supporting structures, or the load itself.

“As far as hoist safety developments go, the MotoSuiveur device is a big step forward. It totally redefines the way that load safety is addressed.”

The MotoSuiveur’s near-instantaneous detection of overspeed makes it react much faster, and therefore significantly reduce load drop, compared to calliper brakes, says SCX, with calliper brakes normally dependent on reaching a defined overspeed before the system is triggered. “By the time that overspeed is detected and the load arrested, rope pay-outs of between 1.5m and 2m are not uncommon. Certain closed loop safety systems can overcome this, but they introduce other areas of complexity.

“Another significant difference between MotoSuiveur and an emergency calliper brake is that MotoSuiveur delivers ‘permissive safety’. It’s a principle where the safety device must be functioning correctly before machinery can be operated. MotoSuiveur’s intrinsic self-checking and auto-diagnostics ensure the system is ready before any hoist movements are permitted.”

Little continues: “The purely mechanical action of MotoSuiveur does not depend on the integrity of the hoist it protects. It is an open loop, mechanically failsafe system. So, it cannot be caught out by a seized calliper piston, for example.

The compact design of the system facilitates retrofitting into some hoists that do not have room for a standard calliper disc-style brake, adds SCX.

The MotoSuiveur unit reduces reliance on the integrity of the hoist motor, gearbox, and couplings. This allows for the incorporation of a torque limiter between the motor and gearbox, giving mechanical protection against any overload—for example in the event of a snagged load or double blocking.

The device can also be configured to provide an independent recovery option for arrested loads. By reverse driving the worm against the drum, an additional motor is able to remotely raise or lower the arrested load. This allows the load to be released so that the crane and hoist can be taken into maintenance.

MotoSuiveur was initially developed for the high-integrity nuclear crane market, and already in use on many of the UK’s Nuclear Licenced Sites, says SCX. Its benefits are now being recognised in other industries where personnel safety, highvalue or high-sensitivity payloads, or asset protection are key drivers. In total, there are more than 70 MotoSuiveur installations worldwide, over 30 of which have been installed by SCX Special Projects in the UK.

“We’ve already installed cranes featuring the MotoSuiveur device into numerous nuclear sites to be used for decommissioning,” says Little. “We are now also integrating it into solutions for other safety-critical industries, such as aerospace, for handling valuable jet engines, or defence for handling munitions.”

For VFD systems to provide reliable and advanced braking capabilities, the technology behind it has to be sound. Chicago-based Power Electronics International (PE), established in 1969, specialises in the technology, producing the Micro-Speed range of VFDs. These are used for overhead cranes as well as other cranes and hoists, in a full range of industries including nuclear, foundries, and industrial plants.

“All the Micro-Speed variable frequency drives have dedicated hardware and firmware to run a crane and hoist brake control system efficiently,” says Michael Habisohn, president of PE. There are a number of specialised design features: “A separate electrical brake contactor energizes the coil of the electromechanical holding brake while the AC motor is smoothly controlled. The relays onboard PE crane drives are high-quality rare metal contacts made for high-reliability control of the brakes. Also, the circuits used on Micro-Speed Multi-Vector and MX drives are unique in that they have a separate microprocessor to check those relays, which verify that the central drive processor is working flawlessly; if not, then the secondary microprocessor sets the brake. This feature is the highest-reliability system available today.

“A unique feature of the PE drives is that on the horizontal motions (bridge-trolley) settings are available for the motor to reduce the speed of the crane, inject DC into the AC motor, which electrically stops the motor for perfect stopping, and then the brake is set. Uniquely, there is nearly no frictional wear on any brake linings causing the mechanical system to have multiples of normal brake lifetime—the ultimate in increasing brake life on both hoists and horizontal travel motions.

“For hoisting, with the Multi-Vector drive from PE, the same safe brake functions are present as the bridge/trolley. The hoist will also see much less brake wear because of all the internal electrical hardware and software specially designed for high reliability of the hoist brake.

“For closed-loop hoisting applications, the Micro-Speed Multi-Vector’s hardware uses two separate dedicated electromechanical relays on the main printed circuit board of the drive to maintain the safety redundancy of the brake control system. These relays are each independently controlled by the central and brake control processor. The brake processor also monitors the circuit to give the system the highest level of reliability. The specialized brake microprocessor is found only in Power Electronics International crane/hoist variable speed drives.”

The key to the range of benefits offered by PE VFDs is that the units are designed explicitly for hoist and crane use—with particular attention to brake wear and safety—rather than being generic, multipurpose VFDs, says Habisohn: “As a result, you will get the best brake control and wear, which can save thousands or more during crane lifetime. Not to mention with the smooth motor control, the frame of the crane and hoist will have much less structural wear.

“With newer electronic motor control brake safety, brake wear and life of the hoist and crane are increased dramatically along with precision control. Power Electronics International has regularly scheduled crane/hoist drive courses that are available to help engineers efficiently and quickly apply this technology.” 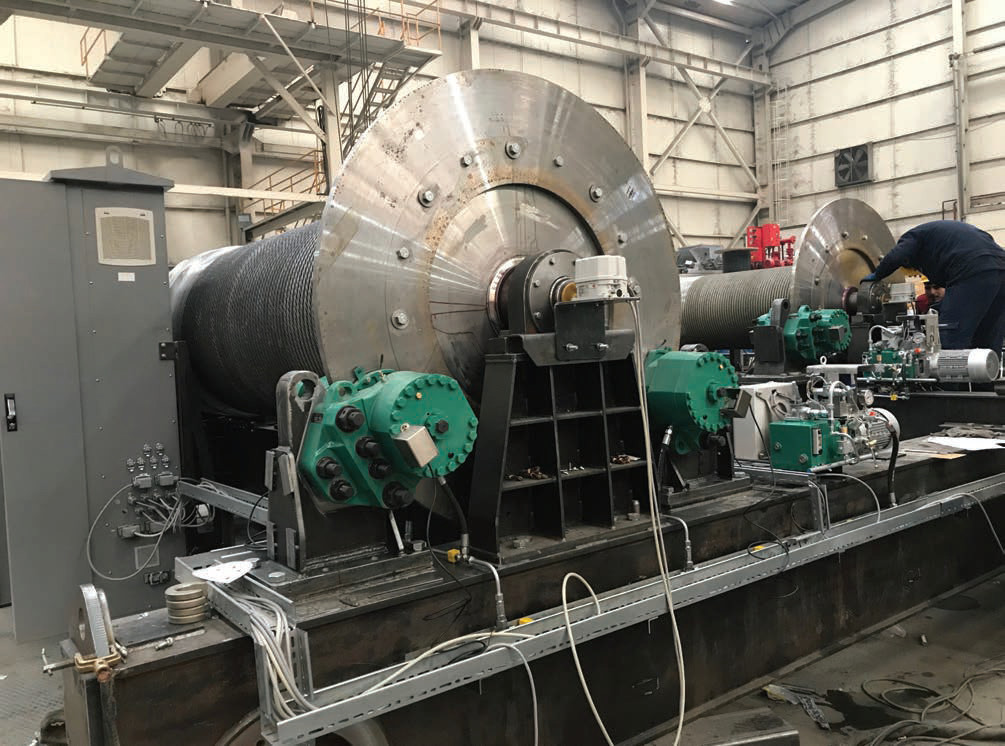 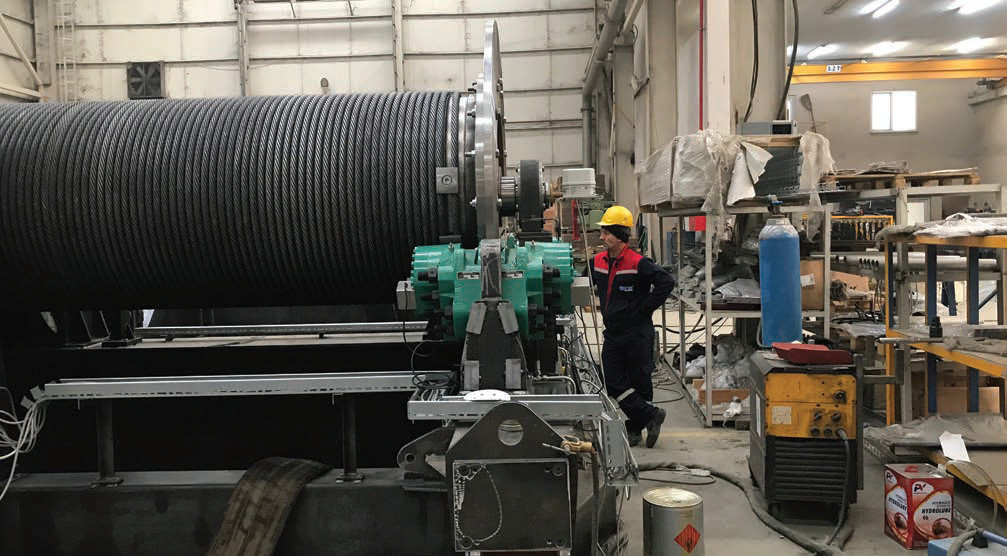 Turkish crane manufacturer CMAK typically uses either electrohydraulic brakes or electromagnetic brakes on its systems, depending on application, environmental conditions, and customer preference. 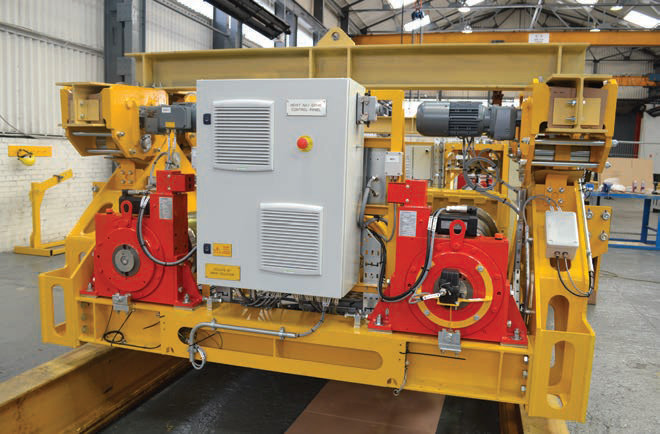 SCX Special Projects supplies cranes with specialised brakes for a wide range of applications, such as this jet engine transportation hoist. 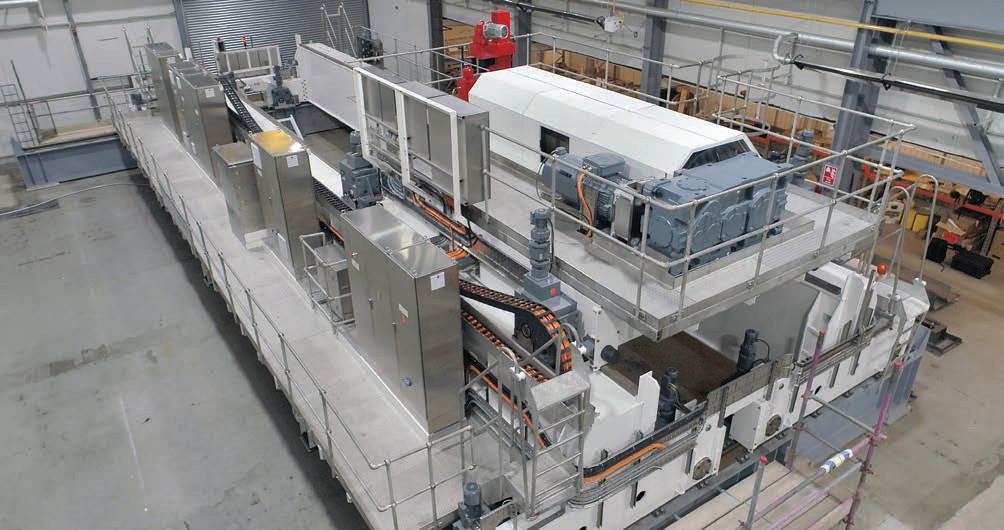